Achieving your dreams takes a lot of work. There’s paperwork to do, bureaucracies to overcome, packing, moving, travelling, shopping, planning, and of course the constant daily grind of maintaining a life and having a job. That’s not even going into all the foundational work of performing at work, interviewing, getting a degree, and everything before that, including deciding what your dreams are in the first palce. Amidst all of that it is easy to lose track of the fact that you have actually achieved your dreams.

Back in 2004 (high school days), at a car show in Corning, New York, I saw a Lotus Elise for the first time outside of Gran Turismo. (Wait, don’t go, I’m not writing out my life story, I promise!) It was somewhere around there (maybe a little before or after) that I got it in my head that I wanted to buy an Elise someday, and drive it on racetracks. Racetracks like the Nürburgring (which I also learned about through Gran Turismo).

Somewhere around 2008, I decided I’d like to try working and living in Europe sometime, because that’s where most of the cool racing happened, and there was just a lot I wanted to do over here. 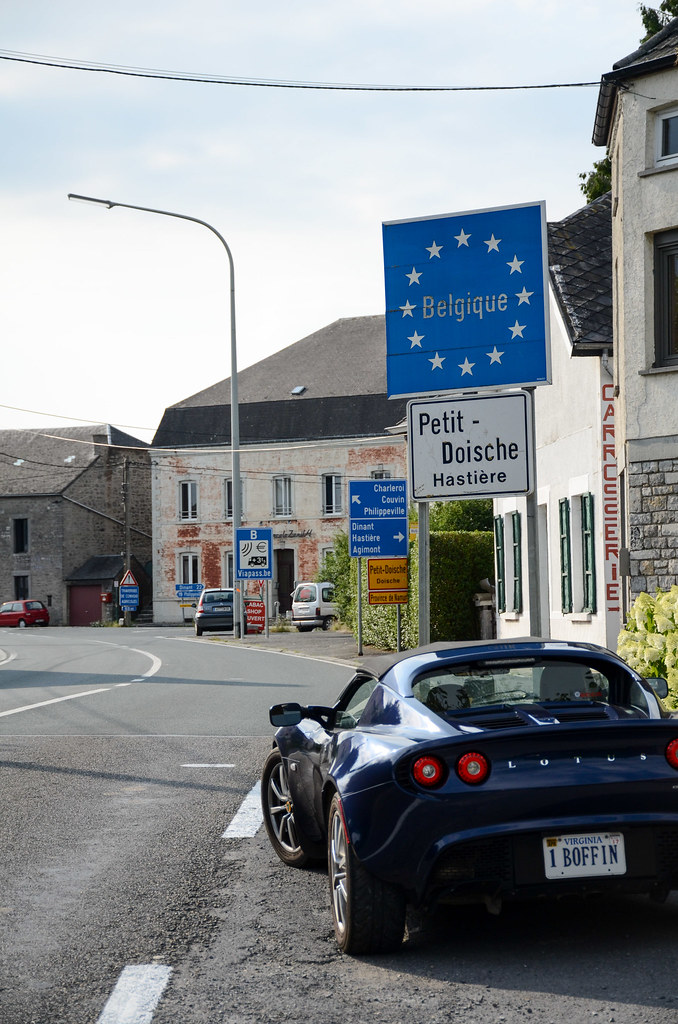 I had just stopped for a quick photo-op on the way back from hiking in the Ardennes, to try and take a picture that would neatly encapsulate my current situation.

At the time, it was just an item on a todo list. “Buy groceries; Do laundry; Go hiking; Take life-defining photograph; Don’t take too long because you have work in the morning.” It was only looking at it afterword that I realized how significant it was. It’s a perfectly succinct visual confirmation that I’m actually here. I own a Lotus Elise, and I live in Europe. Imagine if I could have seen this picture ten years ago!

And then three days later, I recorded this video [no sound because reasons]:

Driving on the Nürburgring! In my very own Elise! Incredible!

In the moment, it’s easy to forget that I’ve done something amazing. I took the dreams I had for a decade or more, and turned them into reality. The process just takes so long, it becomes a gradual build-up and there’s no specific moment when it goes from just a dream to full reality. The day I accepted the job, I had lots of paperwork to do. The day I landed in Belgium, I didn’t have my car. The day I got my car, I was sick and just wanted to get back home.

Almost every day brings another menial task to accomplish, like spending an entire day going on a terrible bureaucratic scavenger hunt just to find the next piece of paper I need to get my car registered. When I’m on a schedule and there’s always something lame to get done by tomorrow or next week, I tend to overlook the beauty of the amazing things I’m doing in between. I take photos so I can savor the moment later, when I have the time.

Moved from America to Belgium in early 2016 (mostly for the racetracks) and brought my Lotus along for the ride. Back in the US now (with the car), pursuing some photographic endeavors... View all posts by haveracecarwilltravel

One thought on “Regarding Dreams”